“The Hooters” are a band that really loves its fans. I’m saying that because there was never a year that didn’t go by that the band didn’t have a tour, no matter how big, and 2018 is no different. I already posted an announcement about the 2018 tour on the main page, but I thought something like this is important and it warrants a special post. Besides, I didn’t give any detailed info about the tour, so I thought I should do it here.

Tour was named “Give The Music Back” and so far it will visit three countries, United States, Germany, Norway and Switzerland. Tour officially kicks off in the US, on July 19th. They will play 2 shows in Ocean City, New Jersey. After that the band is leaving for Europe, Germany to be more precise. Not surprisingly, but Germany has a very large “The Hooters” following. 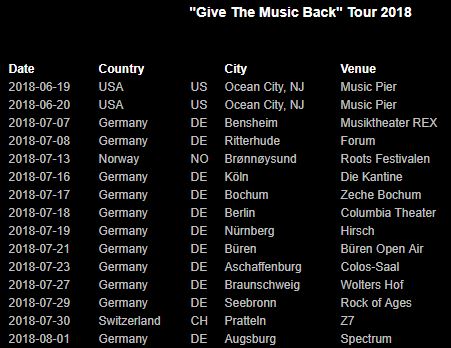 Check out the detailed list of which cities in Germany, Norway and Switzerland will be targeted by the band. After playing only 2 shows in the US, they are heading out to Germany. There they are going to have 2 shows, after which they will play 1 show in Norway. After Norway, they are going back to Germany and playing gigs all the way until July 30th when they jump overy to Switzerland for a one show in Pratteln. Last show is going to be played on August 1st, in Germany, but keep in mind that this list is subject to change, existing dates can be removed, and new ones added. Make sure that you follow band updates on the official tour page.